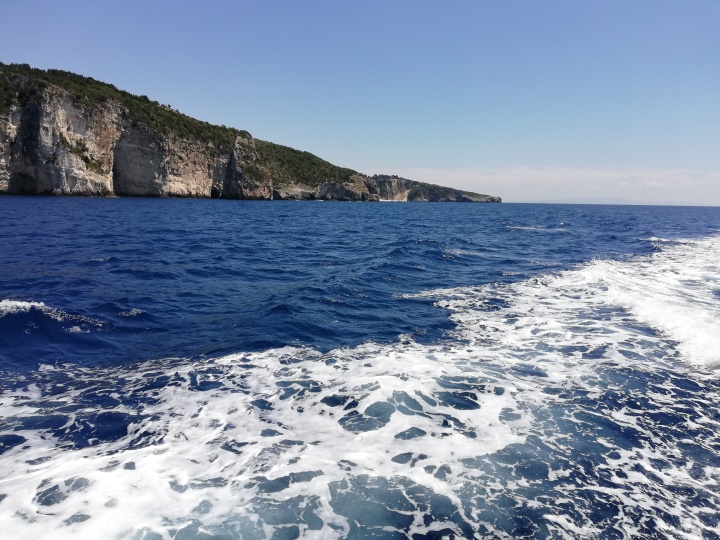 Island of mists and mellow fruitfulness …

That’s by Keats, not me, and it’s about England, not Corfu, and the first word has been hijacked. Just to be clear.

I don’t normally write about holidays, other than in my good old diary. But there was something about this latest holiday from which my daughter and I just returned, that has made me want to … well … vent. Just a little bit. I mean don’t get me wrong – there were lots of fantastic moments, and the views were stunning, but …

For a start, why didn’t someone warn me that it can actually rain all day long in Corfu? Like true, bona fide English rain, with grey skies and shivery temperatures to match. And if it rains when you’re on a sun & sea holiday, and you’re only there for one measly week, well … it just isn’t fair! That’s one day out of seven, gone in a puff of smoke! We couldn’t lounge on the beach reading our Kindles, we couldn’t sunbathe and slurp our ice creams on the golden feathery sand, we couldn’t float on our backs in the luxurious topaz sea, we couldn’t gaze up at the cloudless Ionian sky, full of mythical secrets that are the stuff dreams are made of … All we could do was catch a local bus to the capital of the island, rather unimaginatively called Corfu, and go in search of a shop that sold umbrellas. And then get something to eat – indoors, to escape the torrents. And try to see the glory of Corfu in the rain, rather than sulk and berate the island’s mean God of Weather.

And the mosquitoes! Ah, the resilient little so-and-so’s! On our first night, we barely slept two hours due to constant battles with our midget invaders. (We didn’t sleep much more on subsequent nights, either.) Some time after dawn I eventually drifted off into a delirious sleep, dreaming of the mosquito net I should have pinched from our Rwandan hotel, where there weren’t HALF as many of the indestructible little pests. The following morning I wearily made my way down to Reception, hoping for guidance. A rented machine gun would have been nice. “But we don’t have a problem with mosquitoes,” the receptionist lied at me through her healthy Corfiot teeth.

I mentioned earlier on that we had seven days in Corfu – but actually, it was only six and a bit, as we didn’t arrive at our hotel till 3.00 am. But at least the thoughtful restaurant staff had left us two sandwiches in the mini fridge – totally devoid of butter, dry as sawdust, and accompanied by a couple of bruised peaches. And water. How could I forget the water? And one of the bedside lamps wasn’t working. And wasn’t repaired till the penultimate day of our holiday. By which time there was a major power cut, so nothing was working, let alone bedside lamps.

From about halfway through the week, power cuts assailed us during large swathes of each day. It was of course nice to be in total darkness later in the evening, as we sat on our balcony and watched the stars over the black-velvet sea. But it wasn’t so nice to fumble about through the blackened room in search of the bathroom, the toothpaste, the loo roll, the bed. And it wasn’t so nice when we couldn’t recharge our mobile phones and laptops and Kindles. (And please don’t go all preachy on me and ask why didn’t you leave them at home?) Not so nice when we tossed and turned throughout the night, bereft of air-conditioning but accompanied by raucous choirs of our buzzing enemy. Not so nice when we had to shower and wash our hair in cold water. Come to think of it, the Corfu sea water was also pretty bloody cold. Nothing like Cyprus or Andalucia, or the quaint waters of Lake Kryspinów, way back home in our neck of the woods in sunny Kraków.

Ah – and the boat trip! I’ve been on several of these nautical expeditions before, and had a wonderful time on each one – swimming in the open sea, snorkelling, even trying a bit of diving one brave summer; then drying out on the sun-drenched deck, tucking into the tasty buffet spread provided …

Not so this time. The mean gods of Corfu struck again! This was a large ferry, for a start, with as many bodies herded into it as could possibly, humanly be squeezed in. We were lucky to get two of the last seats – though ‘lucky’ is a questionable choice of word, not being seated next to each other, neither by a window nor anywhere near the open air. But at least we didn’t have to accept portable chairs handed out by the crew to those who arrived even later, and who had to just somehow find a place to squeeze themselves in.

And oh, the queue for swimming! We didn’t even bother joining it. An endless trail of scantily clad bodies – old and young, female and male, ugly and beautiful, in various stages of natural or artificial bronzes, blacks and golds – slowly inched past us (of course our seats would be right by the aisle), resolutely heading towards the solitary ladder that led down into that chilly Ionian sea, and drenching us in sea water when they returned, some of them only fifteen minutes later, by which time the crew was itchy to head off again, this time for the island of Paxois – where we were promised three hours, but barely got two. Scarcely time to get off the exhausted boat, find a place to eat, have a super-speed wander round the winding cobbled streets and cricket-filled harbour, and hurry back to the boat early, hoping to get better seats this time. (Even arriving early, all the best ones had already gone.)

We landed back in Corfu port an hour and a half later than planned, waited forty-five minutes in our stuffy coach for other passengers to arrive, and finally got back to our hotel – way across the dramatic Corfu mountain range, suddenly rendered perilous rather than gorgeous in the pitch-black night – at 10.30 pm rather than the promised time of 8.00, meaning we missed dinner and once again found ourselves rationed with two sawdust sandwiches and a bottle of water in our fridge, this time without even the addition of bruised nectarines. We dragged our weary bodies to the kitchen in search of one of the chefs, found one, and begged for some butter at least. He granted us our request, and even added a butter knife into the bargain.

But despite all the above whinging and venting, we still somehow, miraculously, managed to have a wonderful time in Corfu. And now, true to post-holiday blues, we are pining away something dreadful. Pining for those azure seas and dramatic hills and densely green, luxurious vegetation … because, at the end of the day, it truly is a beautiful island. And when you’re surrounded by beauty and magnificence twenty-four hours a day, seven days a week (okay, six and a bit in our case), how can you possibly do any serious grumbling? I mean, come on, it’s not as if we were held hostage on the island.

In some ways, I wish we were. I wouldn’t mind being held hostage to an awe-inspiring Greek god; a giant hunk who I might even fall in love with, and then be released, reluctantly, several years later, and write a bestselling bodice-ripper about my amorous experiences on the mythical, magical, utterly captivating island of Corfu – alluring even in the rain!

One thought on “Rain, Mosquitoes and Power cuts in Corfu”